You may think that this is a sad post. I don’t mean it to be. It obviously is because it involves the death of our baby boy – Jamie. However, the reason I don’t want it to be sad is because losing Jamie has totally defined mine, my Husband and our Children’s lives and we have a wonderful life. It is also why I have my Business. I will try to explain why we had no choice but to turn the saddest most horrendous time in our lives into something very positive. 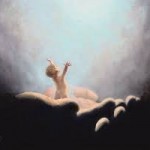 Chris and I moved to Suffolk in June 1998, our son Oliver was nine months old. We moved here from Kent for Chris’ job. We got married back home in Kent 3 months after moving up here and immediately fell pregnant with our second child. I was homesick, knew no one so couldn’t relax with the pregnancy. Just felt something wasn’t quite right but put it down to feeling a bit lonely and homesick. We were late going to our dating scan, a few weeks late. Perhaps in hindsight, that was a sign. Everyone wants to see their baby on the scan don’t they? For some reason, I thought it was a waste of time?? The scan didn’t go as it should have done, there was something amiss but they couldn’t tell us what. We needed to wait a few weeks and go back again when baby was bigger and they could see more. So we waited. Naively thinking that whatever the problem was we would deal with it. This was the way it was. Life deals you curve balls and you get on with it. We were only going to have 2 children and if our second child was in any way “different” then that’s the way it was. So when we returned to the Hospital to have the next scan it completely knocked us for six when the Radiologist informed us she was going to need to get the Consultant. He informed us that our baby was incompatible with life. The worst three words in the world. We were devastated. Our baby boy was not going to survive outside of the womb. He was already dying. He had a condition called Anencephaly. His brain hadn’t formed properly in the very early stages of pregnancy. I will never forget sitting in our Consultants office and asking if our baby was in any pain.  His reply was that he couldn’t feel pain. That part of the brain hadn’t developed. Our devastation cannot be explained. It never can can it? There is absolutely no point in even attempting to explain the range of emotions that we experienced. The 17th April 1999 – as my Husband says – is the one date that will never ever be forgotten. It was the day that we gave birth to our sleeping baby. It felt very surreal when I got out of bed that morning knowing that at the end of the day we wouldn’t be pregnant anymore. For the first time in my 26 years I knew the feeling of wanting to get back into bed and hide under the covers until someone else had made everything better again. I suppose it was the day I really grew up and became an adult. That shit happens and you know what? It happens to us as well.

A month after Jamie was born we finally had the funeral. It was just us. The three of us, it was an overcast day and as the coffin was being lowered into the ground the sun came out. We placed yellow roses on the grave, he was buried with a blanket and a toy sheep. I couldn’t have him getting cold. And then life seemed to stop. We had no choice but to get up every single day, Chris to go to his brand new work and me to look after our 19 month old son, but the days seem to roll into one, we were trudging through thick mud all the time, we were numb. Do you know? Numbness really really hurts. Feeling numb is the most painful experience ever. I remember spending hours up at the Cemetery, Oliver mixing up all the toys on the Children’s graves, placing conkers on the graves so the babies and children could play with them when they came out to play at night. It was always cold in the Cemetery, regardless of the time of year, it always seemed cold and windy. 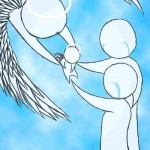 The turning point came when we were lying in bed watching an Ally Mcbeal episode. If anyone watches Ally Mcbeal they will understand the quirkiness of the series. Dancing babies and peculiar story lines. This particular episode was particularly poignant for us. A little boy died and he was taken off to heaven. The ending was really very simple, the little boy dies, he was walking toward the light and  this big hand came down from the top of  the screen and took his little hand and carried him off. I am typing quickly and holding my breath. I can talk about Jamie without bursting into tears but  I cannot recount this story without sobbing, even after fifteen and a half years. We have never watched the episode since and I have no wish to ever watch it again. To be honest I have probably watched sadder programs, I can cry at the drop of  a hat but that program is associated with feeling utter sadness. At that moment in time we were the only two people in the world, clinging on to each other for  dear life. It was also the moment when I let Jamie go. The pins and needles I was feeling in my finger tips disappeared. I hadn’t been able to let him go but that evening I did, and he was able to bound off into the sun and play with his angel friends. He still comes back, plays with my hair sometimes, just to check up on us but generally he is out playing.

So! We had to learn to live again. It happened slowly. We saw the Millenium in at home watching the fireworks on the television, Oliver over tired and over-excited and me not being able to drink as we had just found out we were pregnant again. I knew instantly that this one was going to be just tickety boo! Rosie was born in August absolutely fine. 12 hours after she was born she had her first outing to the cemetery where she

met her brother. The children – all three of them – have taught us everything. Oli kept us alive those months after Jamie was born. Rosie has helped us to live again and Jamie has defined our lives. He taught us mindfulness, spirituality, patience. How to believe in ourselves. There are times when it has been really difficult. However whenever things are heading tits up we take a step back, remind ourselves what we have been through, what we have achieved and step up to the mark again!  I went back to my passion – Holistic Therapies. I learnt Reflexology, more massage, became passionate about Reiki and its ability to heal everything! I became more tolerant in some things, less in others! I wont tolerate fools, I do not like to hear people not wanting to be with their children or needing a break from them. I understand that children are hard work, my children have decided to set up a science laboratory in their bedrooms growing penicillin in every single item of crockery that we own and they have no idea where the laundry basket is. I am struggling to keep them alive because they inform me several times a day (even when they are at school) that they are staaaarving to death! They went off to their Grandparents in the Summer, we put them on the train and then joined them four days later. We missed them terribly during that time! Mind you, they didn’t miss us!

Jamie is a constant in our lives. The Children know no different, we talk about him. We buy a new candle every Christmas to put on the table in memory of him. Every time my business evolves I have had a quiet word with Jamie or he has given me a kick up the arse, making me believe in myself. I have very small crystals in my treatment room, I am always finding them on the floor. I have words, if he comes in to have a nose around or play please can he tidy up after himself! We don’t have the need to go to the cemetery all the time. We wave as we drive past it and if I see something that would look nice on his grave I pop in and have a little chat. We tend to go in Autumn to put conkers on all the babies  graves, Christmas, his birthday and I will always go around Mother’s Day.

There are times when the grief can grab your heart and give it a vicious tug at times when you least expect it. I have learnt to accept that feeling, allow it to overwhelm you for a little while and then get back on track. I have never believed in the words that time is a great healer. It bloody is not! Time heals nothing. You just learn to live with that pain.

Jamie was meant to come into our lives. We knew him for the briefest of moments yet he has had the profoundest effect on our lives. He has made us understand love, all consuming love that can never be taken away. He has a star named after him, I haven’t a clue where it is but it is the biggest and brightest one in the sky. Look out for it, he has enough love for you too. 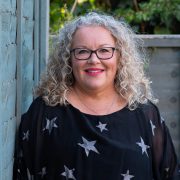